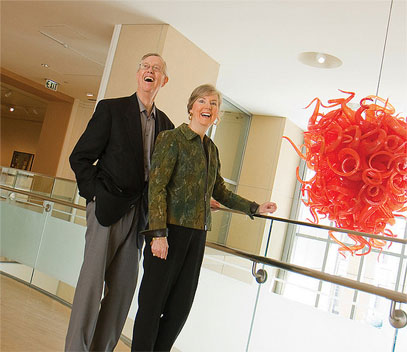 Leigh Weimers, the beloved writer whose column ran in the San Jose Mercury News for more than 40 years, was a life-long champion and eloquent supporter of the arts in Silicon Valley.  A mention in his column could catapult an actor, singer or painter into the talk of the town and launch a career. He and his wife Geri were ubiquitous at the theatre, ballet, symphony, art gallery openings, fundraisers and literary events.

David Butler, editor of the Mercury News, said in his obituary, “he was a community activist who helped put Santa Clara County, especially when it came to cultural offerings, on the Bay Area map. Folks who have found in recent years that they don’t have to go to San Francisco to enjoy a first-class play or a musical event or an art exhibit have Leigh Weimers to thank.”

In his memory and honor, the Rotary Club of San Jose has established the Leigh Weimers Emerging Artists Awards.

These awards, first given in July, 2013, are presented to outstanding artists who have yet to be widely recognized for their talent, vision and artistic accomplishments.  Previous awards have ranged between a $1,000 and $5,000 cash prize, and up to four winners will be invited to show their work and/or speak at a lunch meeting of one of the world’s 10 largest Rotary Clubs.

Donate to the awards >

The artists come from the following fields:

The Rotary Club of San Jose

The Rotary Club of San Jose is the community’s most active and well-known service organization. Celebrating its 100th anniversary in 2014, the club’s members have volunteered more than 3 million hours for community and international service while being at the forefront of efforts to build the infrastructure and social fabric of our community. Most importantly, more than 4,000 business and community leaders have shared in the fun, fellowship and service by being members of the Rotary Club of San Jose while upholding the ideals of humanitarian service and high ethical standards.